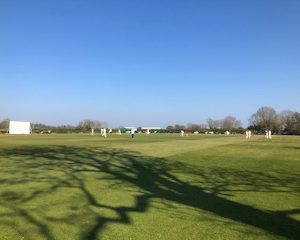 Another good month for the club with much success on the pitch and some great fun off it.

On Thursday 7th July, Matty Fisher joined the juniors training night to get involved in coaching and then joining in with the youngsters for what seemed to be an eternity. There were many happy smiling faces as it’s not every day you get a chance to play with an England test player. This was followed by a Q&A session with Matty, a BBQ and various fund-raising activities which all made for a great club night.

The 1st XI has had a mixed month with a loss to Woodhouse Grange in the league and a further loss to Driffield off the last ball in the semi-final of the YPLN T20 Blast. However, there as great delight in beating both York and Beverley Town convincingly. At York there where runs for Dulash Udayanga and new boy Will Bennison, who also took three wickets along with Ash Watson. Ash  figured again in the destruction of Beverley Town with 7 for 29 to bowl them out for 75. Bridge knocking them off for the loss of one wicket.

Success also came in the Viking Cup quarter-final against Elsecar from the Yorkshire League South. Bridge posted 270 in 40 overs with a century from Dulash Udayanga and contributions from Tommy Hudson (47) and Adam Fisher (38) and a 27 off 10 balls from Isaac Giannini. Although rain affected the visitors were never in the hunt with Bridge winning by 57 runs with wickets for Freddie Collins (3) and Dave Henstock (2). The semi-final against either Wakefield Thornes or Woodhouse Grange will take place on 7th August.

The 2nd XI has had a decent month with good wins over league leaders Thirsk and Studley Royal. Skipper Jack Hugill made an impressive 104 against Studley Royal with David Hull helping himself to four wickets. The Thirsk game was completely one sided with the visitors being bowled out for 118. Danny Cass and Harry Sutcliffe the pick of the bowlers with four apiece. Tatenda Shuttleworth, Will Warren and Harry Sutcliffe knocked them off. These good wins were followed by an inexplicable loss to Bolton Percy – a “bad day at the office”

The 3rd XI had a good month with 2 wins and a loss the wins came against Pocklington with a great chase of 235; runs from Rich Ainley, Andy Frank and skipper Tom Magee. They also beat Westow convincingly bowling them out for 98. In between was a bad loss to high flying Heslington 1st XI.

The 4th XI have had a poor month losing all three games, two by small margins in high scoring matches. There have been some good individual performances, the pick being a century for Neil Cowton against Hillam and Monk Fryston.

Junior matches have been a mixed bag but the U11 A team march on with a cup final and a league decider both against Acomb to come.

The U13s battle on with losses to Clifton, York and Acomb, there have been some individual success with captain Sam Giannini and Olly Kettlewell leading the way.

The U9s are a mixed bag with wins and losses in equal measures as the youngsters make their way in the game.

Both grounds at The Castle and The Bridge grounds are in excellent condition but both needing some rain. Visiting sides have been impressed with the playing conditions.