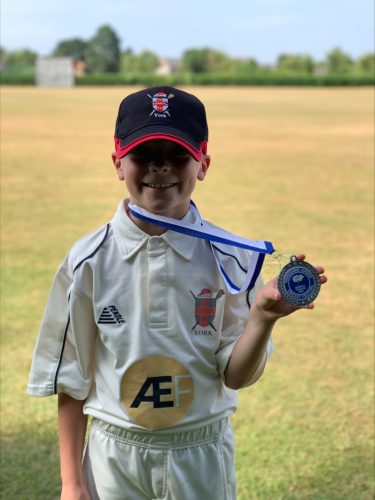 Our Josh Tordoff played for York U9s at the Yorkshire Cricket Festival finals day (see picture). After riding their luck York just beat Nidderdale by 3 runs to advance to the final. They were well beaten by an excellent Huddersfield side in the final.  It was hot and all the boys played really well.

Previously our B team won by 2 runs in a tense game against Malton. No player of the match as all played a good part. Notable mentions to Arthur Harrison for top scoring, great ‘death’ bowling from Ash Koneti and two good wickets from Oscar Todd.

Our B team also played against York, coming out easy winners with a 109 run win. Oscar Todd was the What Life & Mortgages PoTM for his super keeping, hardly letting a ball through. Arthur Harrison was a close second with his solid all round performance topped by a brilliant one handed catch at mid-wicket.

Our C team went down to Woodhouse Grange by 27 runs last week. What Life & Mortgages PoTM went to Isaac Boanas for all round good catching, batting and bowling.

Previously our C team won by 37 runs against Heslington. Jamie Thorn winning the What Life & Mortgages PoTM with a 2 wickets for 7 runs and scoring 27 off just 12 balls.

Our A team won against Woodhouse Grange by 41 runs. A good team performance, Reuben McBride edged the What Life & Mortgages PoTM with 2 wickets and 13 off 8 balls, a catch and a run out.

Our A team also progressed to the final of the U11 cup with a comprehensive performance in the semi final against Bolton Percy, winning by 10 wickets. Tight bowling and fielding all round kept Bolton Percy to a low total. What Life & Mortgages PoTM was Riley Hirst who batted and bowled well supported by Jacob Popplewell with the bat and by Max Laycock who got three wickets.