Report by Albert Pattison from Lords – Pictures courtesy of The Press, York 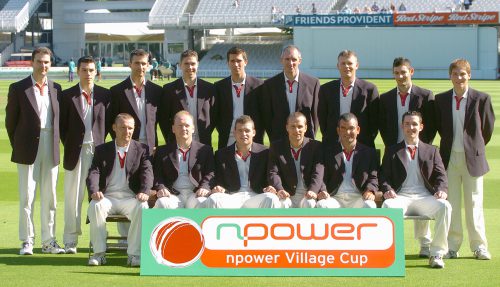 The Sheriff Hutton Bridge team before the match at Lords. Pic: Mike Tipping

Sheriff Hutton Bridge won the Npower National Village Cup in dramatic fashion at Lords when they became the first side in the 34 year history of the competition to successfully chase a target in excess of 200 when they beat Kent side Eynsford C C by 4 wickets with just 8 balls to spare.

The Bridge were following in the footsteps of fellow Hunters York & District Senior League sides, Sessay who lost to Troon by 18 runs in 1976 and Woodhouse Grange who, after beating Tiddington  by 14 runs in 1995 failed to lift the trophy for a second time when they lost by 20 runs to Linton Park in 1999.

The Bridge pool of 15 players was reduced to 14 when all-rounder Dave Gilbertson who was the only player to have previously played at Lords as a member of the Woodhouse grange team, declared himself unfit after sustaining a shoulder injury on the previous Saturday. There was better news regarding Steve Crowder who’s badly bruised thumb from the same league game had recovered sufficiently for him to take his number three spot in the Sheriff order.

Any hints of Yorkshire complacency was dispersed
Eynsford’s problems continued when Houldridge gained a second scalp when Ian Playfoot fell for 12 to a good catch at backward square leg by Peter Crowder which left the Kent based side reeling on 30-3. Any hints of Yorkshire complacency was dispersed as Jamie Wise and Paul Geear mounted a rescue act. After a tentative start the pair blossomed and more than redressed the balance of power. The stand reached 50 off 60 balls and had expanded to 94 when Paul Oldfield’s call into the attack paid dividends when he had Wise caught in the deep by Danny Snowballafter he had made 52 in a 75 minute innings which saw him hit 9 fours and a six. 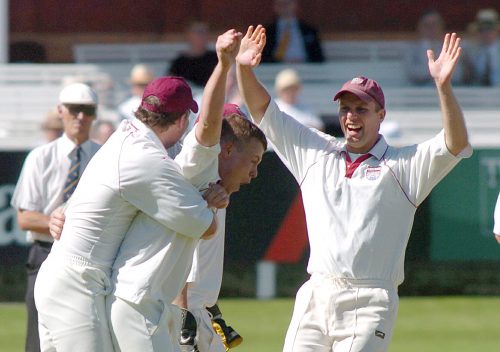 Nicky Scaling is given a hug by his brother Paul after taking a wicket with Steve Crowder moving in to join the Sheriff Hutton Bridge celebrations at Lords. Pic: Mike Tipping

Oldfield then induced Howard Collins to hole out to Dave Houldridge for 8 but then suffered from the swashbuckling approach to batting displayed by Dom Syers. He rapidly made 16 but, in attempting a fifth boundary, was caught on the boundary in the shadow of the pavilion by Paul Scaling off Mike Sinclair.s bowling. Oldfield then took his fourth wicket, clsing with 4-52, as Adam Fisher pouched a second victim and successful LBW appeals by Nick Scaling and Dave Houldridge closed the innings on 201 after 38.5 overs. Houldridge’s figures of 3-21 off 6.5 overs were he pick of the bunch with Nick Scaling taking 2 for 28 in support of Oldfield’s four wicket haul.

Oldfield fell to a juggled slip catch
Sheriff Hutton Bridge were given an excellent start as Ian Clish, in particular, scored rapidly. With Paul Oldfield batting in his usual solid fashion, the score moved pleasantly to 50 without loss in 31 minutes at a run-a-ball and it was something of a surprise when, at 60 Oldfield fell to a juggled slip catch by Krishnan Nadendla for 18. Clish and Steve Crowder continued in un-troubled fashion and had taken the total to 93 when, after opening his bowling stint with two wides, Ian Playfoot had Clish caught on the short cover boundary for 37 after the opener sensed a gift boundary off another wayward delivery.

This dismissal triggered a  mini-collapse which unclasped the Bridge’s apparent grasp on the trophy. Firstly Paul Scaling fell to an outfield catch by a sub fielder after scoring just a single then Peter Crowder played on to a delivery from skipper Ben Wise and was out for 2. The third wicket to fall in a bad spell for the Bridge which produced only 12 runs was that of Nick Scaling who was bowled for 1 by Nadendla and left the Bridge in a state of disrepair at 126-5. 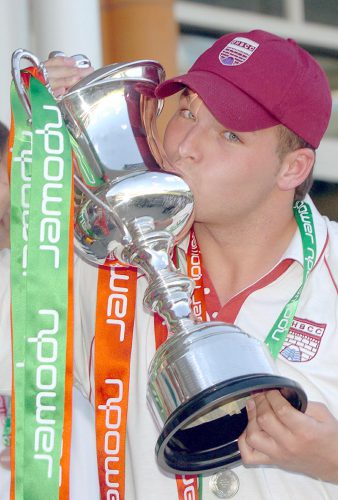 Crowder moved to a priceless half century off 90 balls and sensing the need to accelerate  began to take chances. This paid dividends and he was dropped at long off when on 55 by Nadendla who not only spilled the chance but allowed the ball to cross the ropes for an important four. A late bowling change proved to be disastrous as Crowder hit a six and a four and he was able to complete a job well done when he hit the winning runs off the fourth ball of the penultimate over. He remained unbeaten with 76 to earn a bottle of champagne as ‘Man of the Match’ whilst  the youthful Fisher made 14 not out.

“…a wonderful game of cricket…”
Robin Marlar in his after match speech quite correctly spoke of a wonderful game of cricket and gave credit to both sides for both their sporting attitude and their competitive approach. He questioned how a side containing three ‘Wise’ men could lose and speculated that the fact that the winners name had strong cricketing connotations in ‘Hutton’. He sympathised with the sporting losers and saluted the victors who became the fifth Yorkshire name on the trophy. 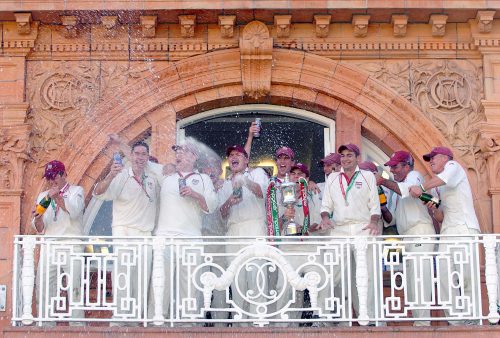 Sheriff Hutton Bridge crack open the champagne to celebrate their victory on the balcony at Lords. Pic: Mike Tipping