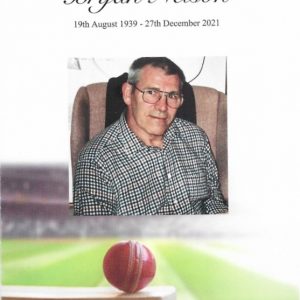 The club is sad to announce the death of Bryan Nelson – one of the club’s great stalwarts and one of the most likeable members which was emphasised by the turnout at his funeral.

“Nello” as he was affectionately known played for “The Bridge” since he was 15 years old in 1954 and apart from a short break, played through until retirement in 1987. During his time at the crease the hard-hitting left hander held the clubs batting record of 139 not out in Division 1 of the York League against York Railway Institute in 1963. This record was not surpassed until 1997.

A scaffolder by trade Bryan spent many years on the North Sea rigs which curtailed his cricket somewhat otherwise he would no doubt have held many more club records.

After retirement he dedicated his “cricket” time to helping out with ground maintenance saving the club thousands of pounds in the process – Bryan could fix anything!

He will be missed around the club for his humour, work ethic and encouragement to many of the younger players. He was the epitome of a real clubman, an award that was presented to him last year.

He is survived by his wife Hazel, children, and grandchildren.