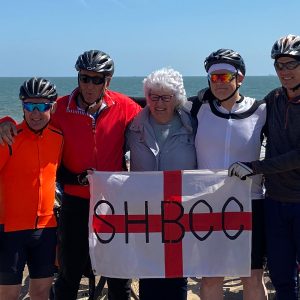 Having successfully completed the Coast to Coast bike ride, David Gilberston reflects on three days in the saddle.

Despite Rich not being able to make the first day on medical grounds the team were in good spirits although a little apprehensive on leaving Morecambe ahead of the first day, which we also knew was the hardest day featuring the most difficult climbs and over 61 miles of cycling.

The morning passed without major mishap and we were soon back in Yorkshire, the highlight probably being the smiley face we received from a speed camera as we entered a village at 27 mph. Training though had been geared around trying to get up the hill leaving Settle which we knew came immediately after lunch.

After about 10 metres of the climb David’s chain came off so while Mike and Paul continued to climb David returned to the base of the hill to start again. Well, we all made it up the hill without walking or stopping, although its fair to say a great deal of heavy breathing was required!!! A sense of euphoria took over, very prematurely as it turned out as we had another 25 miles of hills to climb or descend. Indeed the day contained 6000 feet of climbing not the advertised 4000!!!

The team stopped for photos on the tops with highland cows, cycled through a flock of sheep and generally made good progress until a sign saying Pateley Bridge 8 miles appeared at the bottom of a very long hill. The next few miles were pretty difficult before the final descent into Pateley Bridge where we ran into Foxy (Louis Foxton) and arranged to have a beer with him. Our legs were humming but there was a genuine sense of satisfaction, the only question was whether we had enough left for day two.

Day two started with the arrival of Rich raising everyone’s spirits. Progress was serene until Mike decided to run into Paul and then fell off like a dying swan, before rolling off the road like a footballer who is trying to get off the pitch!! Following remedial work to Paul’s bike and time out to allow Mike to recover we continued to Newton on Ouse where, with the sun shining we made the decision to travel an additional three miles and visit the Bridge. It was great to see everyone, although the fact that they were resurfacing the road led to complications on both arriving and leaving. We then continued to Pocklington finding the only road resurfacing going on in the whole of Yorkshire on our route.

Day three was the victory parade, well that was how Rich described it. The weather was good, spirits were high and the oil seed rape looked great. We arrived in Bridlington slightly ahead of schedule and were delighted to have both finished and meet the welcoming committee. It was particularly emotional to give Hazel a hug before fish and chips! That was the 170 miles completed, well 173 with our detour.

Thank you to everyone for your support both for our morale and financially, we have raised over £4500 split between the Bridge Academy and the British Heart Foundation and yes we think we did Bryan proud!!