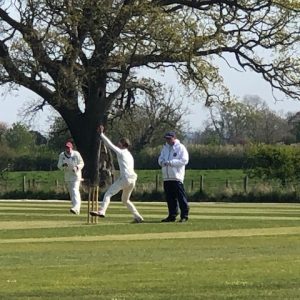 The season started with mixed fortunes. The 1st X1 are sitting second in the league despite a comprehensive defeat to York and a surprising one to Acomb. Victories against Beverley, Clifton Alliance and Driffield have steadied the ship. Some good batting performances from Louis Foxton, Mark and Adam Fisher. Mark’s 124 not out being the highlight so far. Bowling honours have been shared with new boy Ash Watson contributing with both bat and ball.

The 2nd XI have had a good start losing only one of their first four games, this puts them fourth in the league behind favourites Knaresborough and Thirsk. There have been some excellent performances from Matthew Maltby, Rob Stevens and Isaac Giannini with the bat, the latter securing victory against Bolton Percy with a half century in thirty odd balls. Bowling has been shared around but Harry Sutcliffe and Tom Appleton have both contributed well.

The 3rd XI has had a horrid start and sit last without a victory. A few of the stalwarts have not been available but several youngsters have stepped up with good contributions, particularly Will Langworthy with the ball. Credit must also be given to Tom Magee who has stepped in at short notice to take on captaincy of the side.

The 4th XI has also had a tough start and sit 7th in the league with one win. This however doesn’t reflect the contributions from the 13- and 14-year-olds – the highlight being a fine half century from Archie Goodwill – ably supported and encouraged by skipper Neil Cowton who gives them many years!

The junior section has had mixed fortunes. The U15’s are holding their own in a tough league while the U13’s are struggling in a tough league with only one win. The U11’s A, B & C sides are all doing well with all undefeated in their various leagues. with the u9’s having mixed results as 7 and 8 year olds find their feet. The Rockets have now started developing the next generation.

The club has had some representative honours at junior level with Riley Hirst playing (and top scoring) for North Yorks U10’s; Sam Giannini, our u13 captain, has been selected to Captain York and District U13’s in the upcoming festival; Josh Tordoff and Zac Powell, have been selected to play for York and District U9s at a tournament at Wyekham CC on Sunday 5th June. This is just reward not only for the boys but for their coaches who put in many hours in their development.

Both grounds are in great condition and credit must go to the ground staff who work tirelessly to prepare good wickets for all the sides whether 1st team or U9’s.