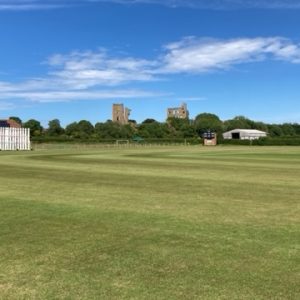 As is usual it has been a mixed bag with some great wins and some defeats – some of which make you wonder!!

The 1st XI lost to Sessay in a shock result but pulled it back a week later to beat Scarborough and in between Castleford in the Viking Cup. The team currently sit third in the table.

Some excellent individual performance from Louis Foxton and Dulash Udayanga with the bat and Ash Watson with the ball. Dulash, our Sri Lankan overseas player, has now gone past 350 runs and Ash sits on top of the bowlers with 19 victims.

The 1st XI proceeded to the T20 Finals Day by comprehensively beating both Acomb and Sessay on the same day; wicketkeeper Alex Liley scoring well.

The 2nd XI lost to both Heworth and Knaresborough but recorded fine wins against Sessay and Dringhouses with strong individual performances from Matthew Maltby and Danny Cass with the bat and David Hull with the ball.

The 3rd XI although started with a struggle have managed to pull off wins against York, Dringhouses and Hovingham with Dan Tuite starring with both bat and ball. The team sit ninth in the league.

The 4th XI with its mix of experience and youth continues to do well with wins against Rufforth and Hovingham. Both games had major contributions from the youth. At Rufforth we saw great bowling from Sam Giannini and Archie Goodwill. Jon Bell weighed in with a superb 47 ably supported by the experienced Wayne Fawcett and skipper Neil Cowton. Hovingham was equally convincing with a great half century from Archie Goodwill and an even better knock from Will Fawcett with 74 not out. Archie also took three wickets as did Arron Cowton and Joe Thorn. They sit 6th in a tough league.

The juniors continue to perform well with the U11As winning all before them at the moment including a fascinating game at Saxton in the cup where having been bowled out for 68 managed to win by 20 runs – Max Laycock taking 4 wickets ably supported by all the bowlers.

The U13s after losing to Heworth in the cup, despite good contributions from Ollie Kettlewell, Will Hutton and Sam Giannini, comprehensively beat them in the league. This was followed with a great win against Malton with Sam Giannini retiring on 31 with Ollie Lamb and Ollie Kettlewell in the wickets.

Our U15s are also progressing well with wins over Saxton and a concession from Yapham. The Saxton game produced half centuries from Rollo Storey and Alex Jenkins with two wickets for Sam Giannini.

The club is also proud of our U15 and U13 captains – Alfred Stephenson and Sam Giannini who have steered their respective York and District sides to the finals of the respective competitions.

The club continues to play on superb wickets and the credit goes to the ground staff who give many hours of their time.