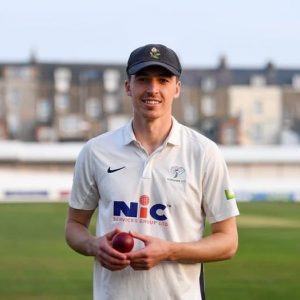 Back in October we reported that Matthew Fisher was selected to go to Australia with England Lions. He clearly impressed and has been rewarded with a full England call up to tour West Indies at the end of February.

The young “Bridge” lad has been impressive at representative levels in the past but his advancement in recent seasons has been curtailed by injury. Matthew said “I appreciate everything everyone has done over the years and supported in tough times. The Bridge is my cricket home and I will represent the club as best as I can”. Now he has his chance to follow the greats of Anderson and Broad.

The national press has been quite critical of the decision to leave the old guard at home, especially when it was the batters who failed in Australia. To his credit Matthew said he would have loved to have toured with and learned from them. Clearly, he learned from them in the nets in Australia!

The club is buzzing with the announcement. The juniors are really excited that they are at a club with an England international and can have aspirations of their own knowing where Matthew started. He is a great credit to the club with his feet firmly on the ground. An attitude everyone can learn from.

In other news both seniors and juniors are hard at work in their various net sessions. The turnout for both has been more than encouraging. The juniors have had four nets running at Galtres Centre in Easingwold with turnouts of around 30 while the seniors, at St Peters on Sunday evenings, have seen turnouts of about 25.

The grounds are nearly ready for the first cut and then it will be hard work up to Easter to get them in playing condition. The recent storms have been a bit of a challenge with some tree damage to clear up.

Posted in News, Seniors
← Matt Fisher has been called up for England’s Test tour to the CaribbeanLeague & White Rose Champions 2019 →