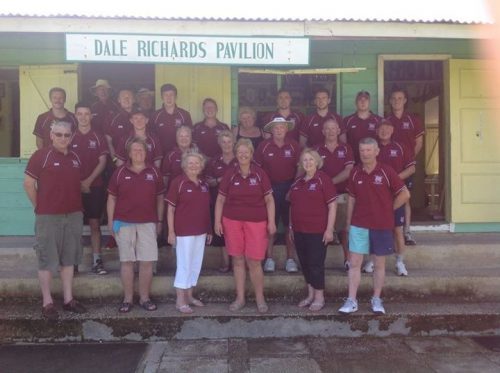 November 2014 & the Sheriff Hutton Bridge tour party of 24 ( Half players / Half Supporters ) headed for the idyllic Island of Barbados. With an age span within the party of 70 years, we were based at the perfect setting of Butterfly Beaches on the south of the Island. After 2 days of compulsory acclimatisation partying, our first match was against the North Stars at the opposite end of the Island, which after a heavy thunderstorm and subsequently effected track, proved a low scoring thriller. Batting in typical Caribbean style, the home side were bowled out for 87 thanks mainly to 4-13 from Jordan Grose & 3-19 from Dan Clipston, however the Bridge reply was just as troublesome. Only Mark Fisher ( 11) Harry Collins (21) & Dan (12) made double figures and we lost our 9th wicket with the score on 84. Amazingly , in all of their time in Cricket, Ben & Chris Harrison found themselves batting together for the very first time in their lives with 4 required for a victory. With every defensive shot by Chris cheered as if saving a draw in the last over of a test match, Ben saw us home in a tense victory. It was a great moment for the Harrison’s & at least means Chris will die a happy man.

The famous Oistins Fish Market was close by & proving very popular with the whole tour party, not just for the fantastic food but for the whole crackling Bajun party atmosphere. This was real Barbados not tourist Barbados & you just couldn’t help getting carried along with it all. A number of us went to the race meeting at Garrison Savannah ( along with Rhianna & Frankie Detorri as it happens ) to help Eddie Barnes celebrate his 17th Birthday. Apparently he is not old enough to drink alcohol, so it’s hard to imagine how poor Eddie got himself into the state he did – it was a long day. Much later on, outside the nightclub, the pavement was duly decorated by Eddie, yet Mark & Dave Phillips still had the job of returning him home to his Mum, Sue who he was sharing a room with. Sadly there is no video footage of this and a number of quotes would be unprintable anyway. 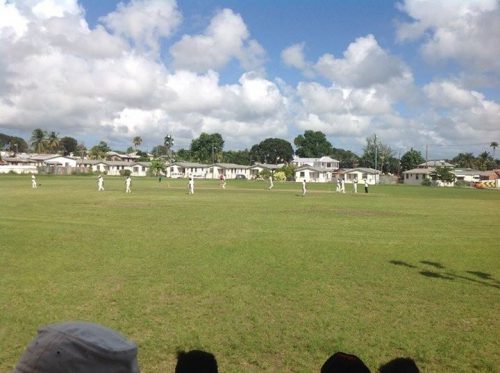 Match 2 was against the Bridgetown Fire Service, literally in the shadow of the Bridgetown Oval. Once again we were rain effected but bowled & fielded particularly well to get them out for 100. 2 wickets a piece for Harry Collins, Sam Dale, Mark & Ben. Bridgetown were a very useful bowling side as we found out when we were 9-3. After a rain break we recovered & were going really well at 69-4 with Freddie on 24 & Dan on 12 when a massive storm ended the game prematurely. After a variety of Duckworth Lewis Calculations we naturally declared ourselves clear winners.
There was just so much to see & do on the Island. Although only 28 miles long there seemed to be a never ending array of stunning beaches & such a variety of bars. Travel was often by the local “Reggae Bus “. Basically a minibus pounding out music, designed for about about 12 people but which would regularly take about 30 on board stopping for anyone who wanted it. Dave Phillips was a quite Brilliant Social Secretary throughout the tour, his never ending rules and games ensured everyone had to be constantly on their toes, and also ensured everyone ended up drinking more they planned.

Our 3rd game was against the Isolation Cavaliers in the middle of the Island – a simply beautiful Cricket Ground & Charismatic Pavilion. The Cavaliers were skippered by former West Indies player Dale Richards. We batted first on a decent wicket in a 40 over game and were given a fabulous start by Eddie (34) & Sam (50) who put on 97 for the first wicket. Mark added 35 & we finished on a competitive 175. Sadly it simply wasn’t enough. Freddie took 5-44 & Jordy 2-35 & although they lost 8 wickets the Cavaliers were a quality batting team and always looked like winning. They were also brilliant hosts. 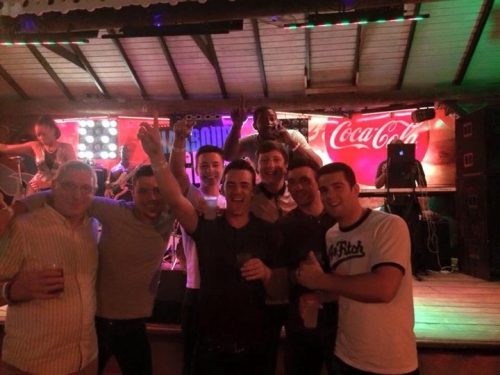 Whilst we were there, Barbados were celebrating their “Independence Day ” with an annual carnival so we decided to head for it at St Phillip. We had heard it started quite early & duly arrived about midday only to find in reality it was nearer 8pm before it really got going. Not much to do then but eat & drink all day whilst the carnival was being set up & prepared. Needless to say we were in pretty good spirits by the time things started to get going. The locals, especially the ladies, were rather intrigued/amused by these well oiled white people, who wanted to dance with everyone in a crowd of about 5000 locals. However not all of the 5000 saw it that way, and with just a slight change of the mood and the mention by some locals of guns, we decided it was best to leave and headed back to Oistins in a bus bizarrely singing along to Christmas Carols on the radio all the way home.

Our next game was against Melbourne Cricket Club. Another gorgeous setting by the sea. Their team was skippered by a very animated ,excitable & competitive character called Nurse ( known as Burger Man to his team mates ) who had played for Barbados, & also featured Franklyn Stephenson of West Indies fame who is still a beast of man. Both are still very good players indeed they were a very strong team. Chris’s legs had given up on him by now so only our guest from Isolation Cavaliers – Barry – managed any runs ,making 62 out of a total of 121 all out against 5 high quality bowlers. We started well with 2 wickets for Barnsey & had them 27-3 but ultimately it was a stroll for Melbourne who won by 7 wickets. Burger Man smashed 84 & it was all over in 18 overs. They were much the better team, yet it was still an absolute pleasure to play in that game, such was the quality of Cricket & fun we had afterwards. As with all the teams we played, they play it hard on the field, usually with a smile ,& afterwards just want to have fun af & talk about the game of Cricket which they are so passionate about & dominates the Island.
Subsequently we heard the fantastic news that Barnsey had received notice of his England under 17 call up (from David Graveney no less).

The Jolly Roger boat trip is famous on the Island, and the day the team went on it was one of the most memorable. We were the party animals of the boat , so much that by the end of it virtually everyone on that boat of any age wanted to join in with us. Having started off as simple Cricket Aerobics on the top Deck, it descended into 4 hours of absolute hilarious madness – just brilliant fun. Picking Fruit & mowing the lawn will never be the same. Having been on the Island for about 10 days now, we were starting to get to be quite well known & almost had our on following – thankfully all for the positive reasons. 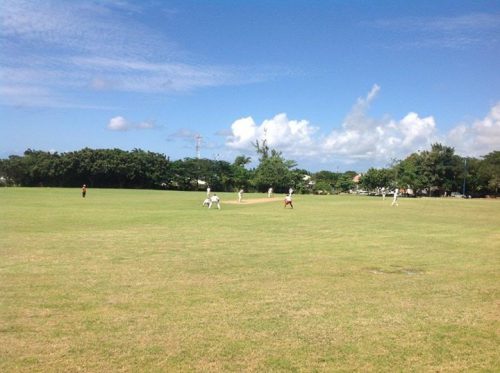 Our last match of the tour was at Welches Cricket Club, where wicket keeper Steve Clipston was given a Guard of Honour in his final Cricket Match. In a 30 over game, Welches got off to a lightening start belting the ball to all corners. They had reached 69 off only 6 overs when a great throw from Social Sec Dave got us a run out. We were up against another current West Indies International – a young lady called Deandra Dottin who clearly spends a lot of time at the gym. Known as the ladies Chris Gayle she danced down the pitch and smacked Ben back over his head for 6 although Ben had the last laugh getting her caught on the edge. In fact Ben ( 1-37) & Sam ( 2-44) really bowled us back into the game with pace off the ball. Then Harry ( 2-21 including Burgan Man who was once again playing against us ) & Jordy (3-30 ) finished things off. 200 was still a good total in 30 overs but given the start they had we had pulled it back well with a lot of credit to Mark for the way he controlled it. Our reply also got off to a flier with Barnsey & Sam (40 ) putting on 99 for the first wicket. After a flurry of wickets we were heading for another cliffhanger of a finish & had slipped to 161-5. The script was was perfectly written with Skipper Marky Fish facing Burger Man needing 8 off the last over of the game. It was so fitting that our skipper launched the penultimate ball for 6 over mid wicket to win the match to huge cheers from the sidelines. Mark finished on 28 with Eddie still unbeaten on 79. It was a quite brilliant way to conclude the Cricket of the tour. The subsequent football match between the 2 teams was an honourable draw.

One of the features of the trip was the fantastic interaction of our entire party – team & supporters of all ages enjoying each others company in all circumstances. For everyone, the tour had been as good off the field as it was on it , & on our last night in Oistins the players took great pleasure in waiting hand on foot on the rest of the party. Fittingly that ended with some dreadful Karaoke back at Butterfly Beaches ( with the exception of our professional singer Harry ). Lets not forget how this trip happened – for example Mick & Nello were scouting out venues & checking out everything for all the games the day before each match .However, most of all, Mary deserves huge credit for basically organising the whole tour in great detail over many months.

Whether judged by the Cricket, Surroundings, Social life , weather, or most of all enjoyment – the tour was a massive success for everyone. 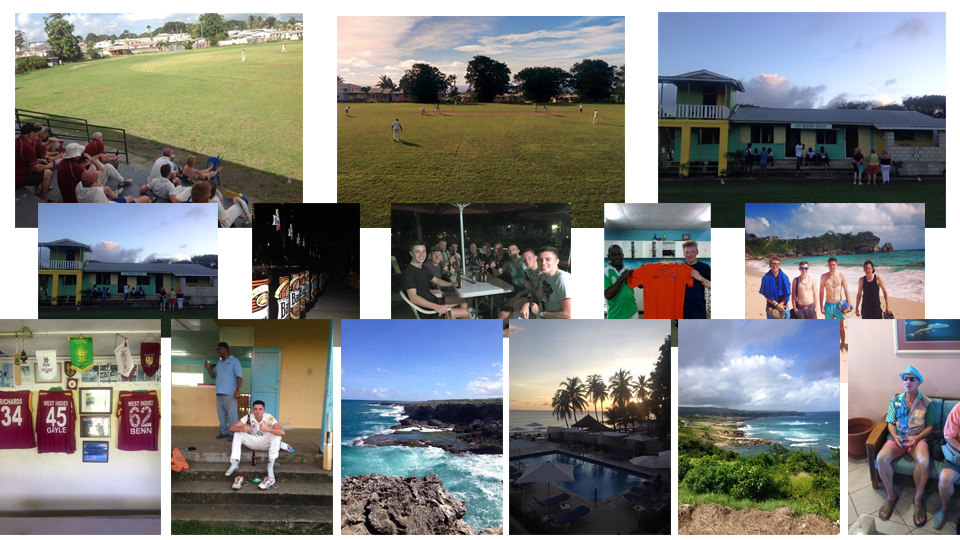